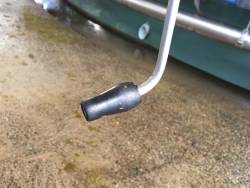 Teat disinfection is the most important action in the dairy during milking for mastitis control - yet it is also one of the hardest actions in which to achieve best practice.

Best practice is 100% coverage of 100% of teats, which generally requires a minimum of 20 ml of teat disinfectant (teat spray) through a well-adjusted nozzle which gives a good “splat” pattern.

Spray nozzles often get knocked around in the dairy from hitting steel and concrete and as the nozzle wears away, it affects the spray pattern produced by the gun, making it dificult to achieve good coverage of teats.

Replacing the guns is an expensive exercise, so here’s a tip to help preserve those nozzles.

From a used milking liner that would be discarded, simply cut a short piece (approximately 20mm long) out of the liner section that is between the shell and the claw (short milk tube) and fit this over the nozzle tip so that it just protrudes past the end of the tip. This will protect the tips from being damaged by hitting the concrete or other objects that will damage it and affect the spray pattern.

Replacing teat spray guns is an expensive exercise - protect them where possible!

If your spray gun has a narrower nozzle, and this section of rubber is too large, try a piece of discarded short pulse tube which generally has a smaller internal diameter.

And don't forget to regularly check the spray pattern by test spraying against a smooth surface such as the nib of the platform (or a sheet of paper), just to ensure you maintain a good "splat" pattern!